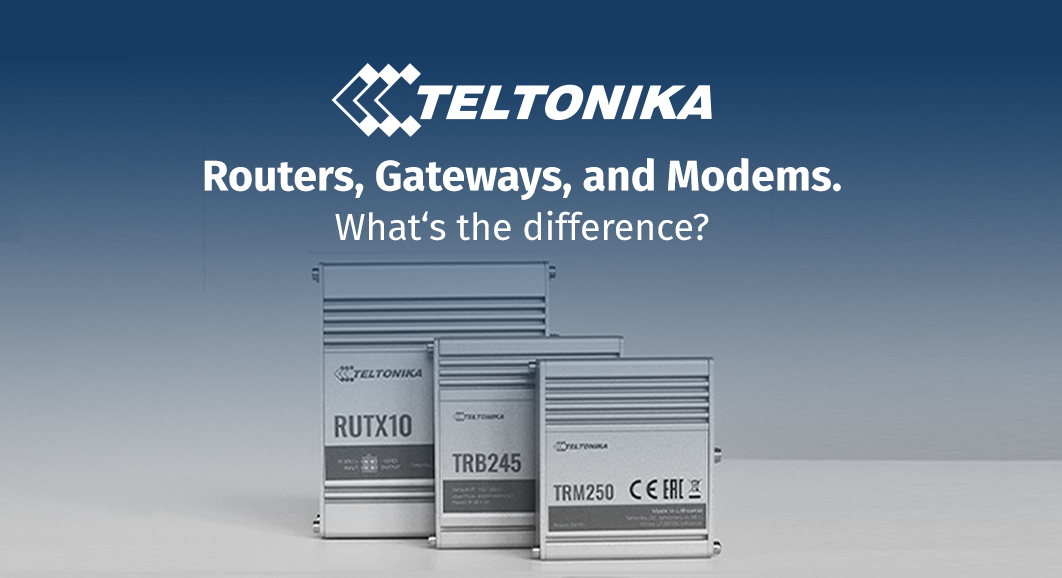 When talking about networks you can hear loads of different terms: Routers, Gateways, Modems.

It gets even more confusing when these terms are used in very similar topics. For example, Teltonika Networks are most famous for their Routers. At the end of 2018, Teltonika also released a series of IoT Gateways called “TRB” and most recently - “TRM” Modem series. So, is it just a fancy way of naming different products or do these terms actually help to distinguish different devices? We aim to discuss the functionality and recognise the key differences between Routers, Gateways and Modems.

A modem is one of the oldest terms used when talking about Networks. A modem is a piece of hardware built solely to do one task and one task only – send traffic from point “A” to point “B” without doing anything with data. Historically, Modems are considered primitive devices that are not programmable thus data security services and traffic routing capabilities are not present in such devices. Moreover, Modem works like a key, a key to the internet. Similarly, to a key, majority of Modems cannot make a connection without the help of software running on the device it is connected to.

With Modems being one of the simplest networking devices, Routers are the most advanced devices in networking. Routers, similarly as Modems are used to provide and manage internet connection. It can be said that every Router has a Modem built-in. However, at this point similarities end. When router is used, there is no additional need to use another device to control it. Routers can and do provide internet connection autonomously. They possess data routing capabilities allowing to provide internet access to multiple devices simultaneously. This capability of handling multiple interfaces and various devices connected to it makes Routers very versatile and adaptable to a use case scenario. Another massive difference between Modems and Routers is software functionality as they usually come equipped with some form of data security services such as firewalls and multiple data tunnelling services.

Gateway is a term widely used and quite often misused while talking about networks. Term Gateway gets often mixed up with term Router and there is an excellent reason why. They are very similar. When you look at the functionality of majority of Gateways and Routers you will find many similarities. Both Routers and Gateways work autonomously; both are usually equipped with security functionality such as firewall and data tunnelling capabilities. So how are they different? The principal difference between Routers and Gateways is the number of interfaces it can support. While Routers are designed to manage multiple interfaces, Gateways usually are designed to have only one interface. Thus, it can be said that Routers are meant to connect multiple devices to internet and Gateways are meant to connect only one device.

Discover the performance and innovation of Teltonika.
For more information call us on 0121 783 4477 or email us at sales@intecmicros.co.uk.

Our dedicated team are here to provide the very best pre and post sales experience possible. If you have any requirements that you would like to discuss further please call us, email us or use our contact form and one of our team will get back to you as soon as possible.